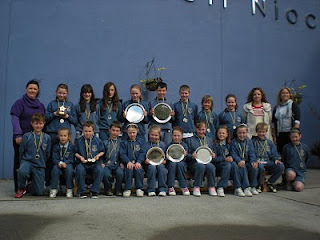 Scoil Niocláis Swept The Boards at the Swimming Gala!!

Well done to all the pupils who took part in the Northside Swimming Gala in March!
Twenty students from first class to sixth class did Scoil Niocláis proud at the swimming gala. Each student won a medal, with many taking home two or three medals, ranging from bronze to gold.

Children took part from five different schools from Cork. The children opened the gala by parading around the pool, school flag held high and finishing with the National Anthem. A win in the very first race of the gala got us off to a great start. It got better and better from there, with every swimmer doing their very best and reaping the rewards for their great efforts. Plates were awarded for winning Sections A,B and C of the event, the children achieved first place in the relays and to top it off their effort as a team was awarded by adding up all the points gained throughout the day and they were presented with the much sought after Overall Winners Plate!! The under 8s and under 9s did really well in what was their first Gala for some, to achieve the positions they did in the races and gain the very important points to achieve this Overall Awrad. So a special thanks to them.

A very special thank you also to Fiona O’Callaghan who managed the team so well on the day and during preparations. Thank also to Ms. Hipwell for all her help on the day of the gala.

Well done again to all the swimmers who took part for their excellent behaviour and speedy swimming!!